I never intended to run 100km. Really. Honestly.
I only set out to try my hand at 5km.

In 2012 I was just coming out of a job that involved shift work. It wasn't unusual to eat McDonalds between the hours of 2am and 5am, full meals, not just snacks.
I told everyone I'd given up smoking. I hadn't and I went to extreme lengths to hide it.
I also never really been active, I played basketball as a kid but never went to the gym or played any sport. The extent of exercise I had was to walk the dog and even then if it was too cold out, the dog didn't get walked.
I was 34 years old.

What a new world I experienced watching the runners come sailing through the half-way checkpoint, svelte, speedy, making it all look like it was too easy. I watch as Simon is one of those runners and I'm choking back tears, my heart is filled with pride and brimming with enthusiasm, I start thinking 'I want to be like them'.

I demand a photo of the dashing duo and off AB goes to finish their adventure. 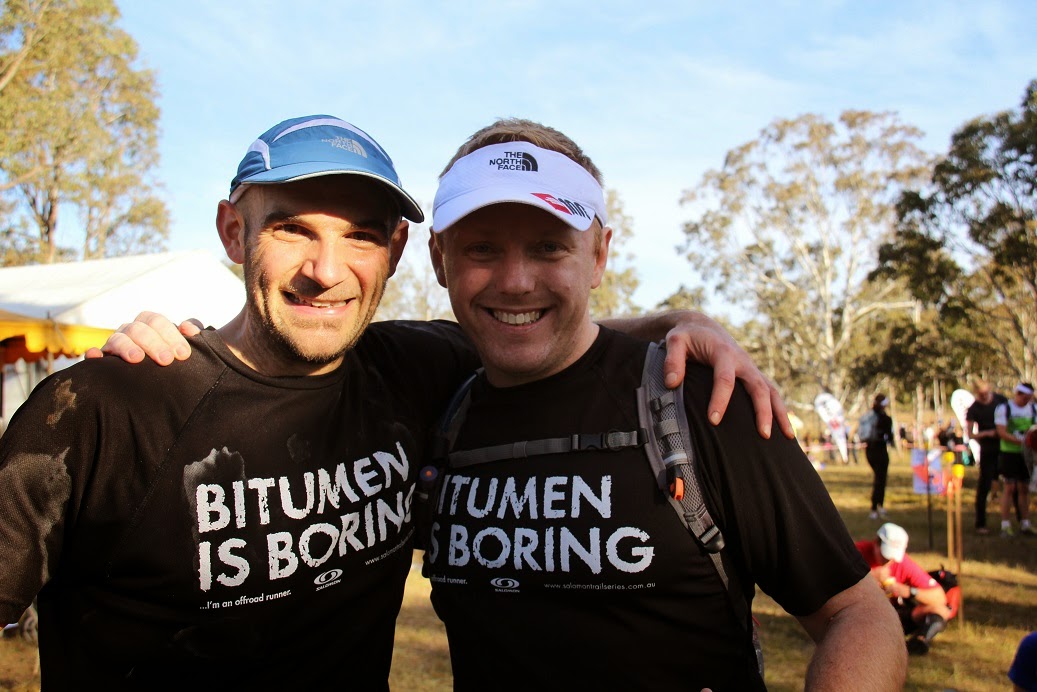 Watching those runners finish changed my outlook, I returned to Melbourne with a goal. I was going to run 5km.
I signed up for Run Melbourne's 5km event. I downloaded the couch-to-5km app and set out with training after work. 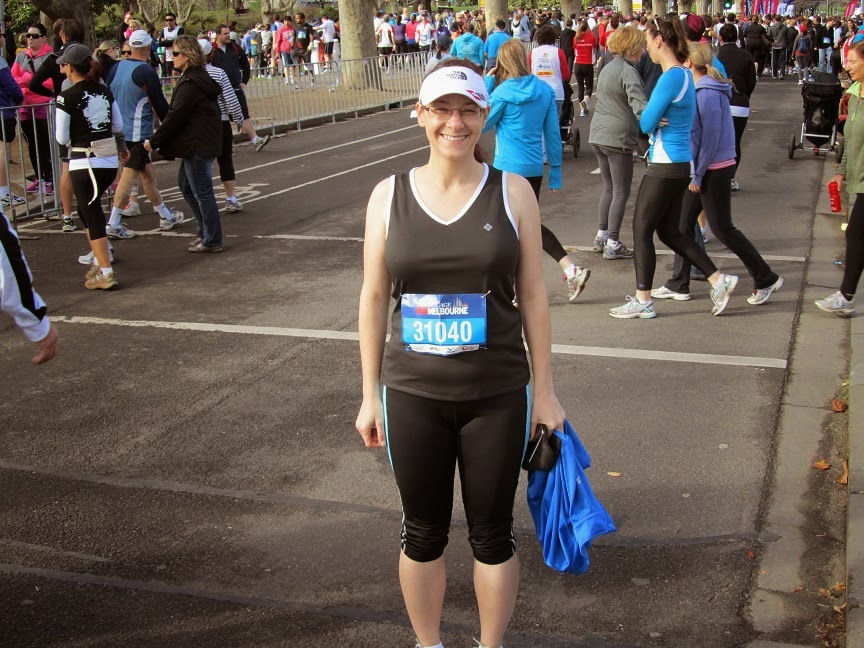 In my best K-mart outfit I set out for a 33 min 5km. I'm over the moon! My first race and I had a thirst for more. With Simon and AB's influence of trail running, I wanted to try my hand at that. I remember thinking 'how much harder can it be?'. Wasn't I in for a little shock!

So I signed up for the short course at the Salomon Series at Plenty Gorge. I'm joined by Alex, AB's wife and we're on a mission for trail fun. It was anything but. I hated it. Who put those hills there?? 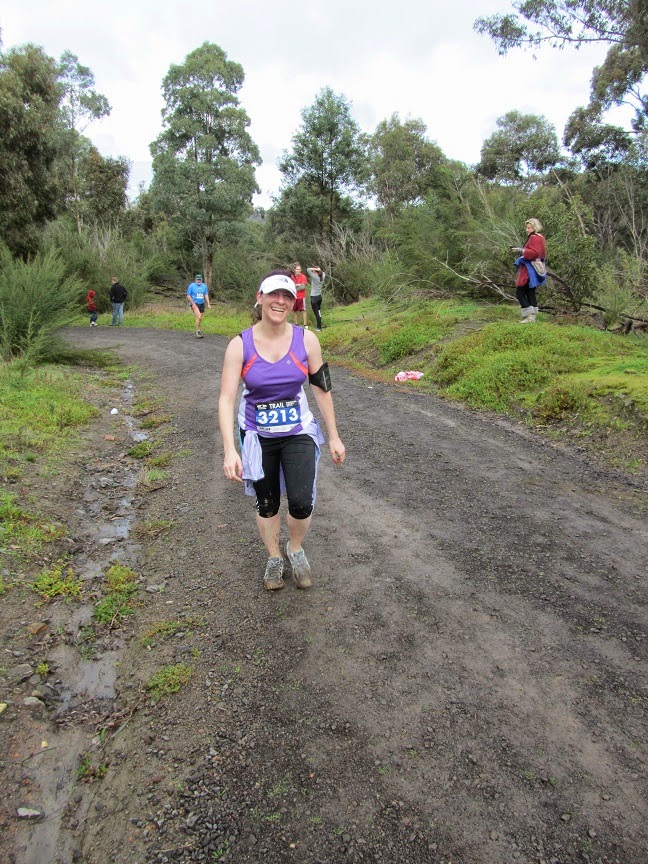 It wasn't a hill. It was an incline. But at that stage of my running life. It was HUGE. I remember shoo-ing Simon away with the camera, I didn't want to be photographed walking.

I dusted myself off and thought to try again. This time at the inaugural Surf Coast Century weekend 2012, with the last of the Salomon series run's in Anglesea. 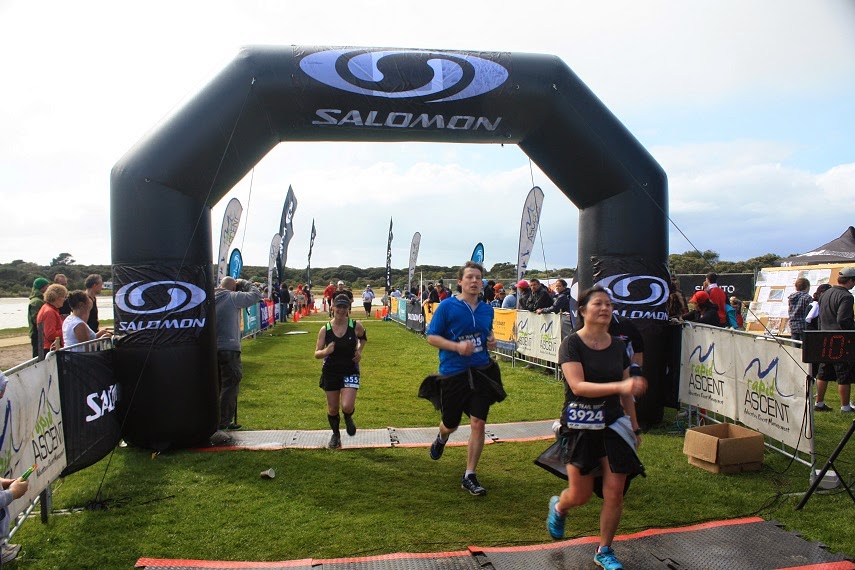 2013 started with a more determined focus. I joined a run group.
The most I'd ever run was 10km. So training for Run for the Kids 15km and half-marathon's were exciting achievements. Not to mention my first thoughts of trying a 50km trail run!

I floated the idea with Alex, 'do you want to try the Surf Coast Century as a duo?'. With butterflies in my tummy, we signed up. We became team Chunks (me) and Mo (Alex).

September 2013. The dreaded ITB plagued me for almost the entire first and second legs. I rang Simon in tears at 39km begging him not to say who he was on the phone to. He gave me the best advice 'Be present. Live in the moment. Enjoy it the best you can'. With that pep talk, I finished my first ultra but felt it was unfinished business. 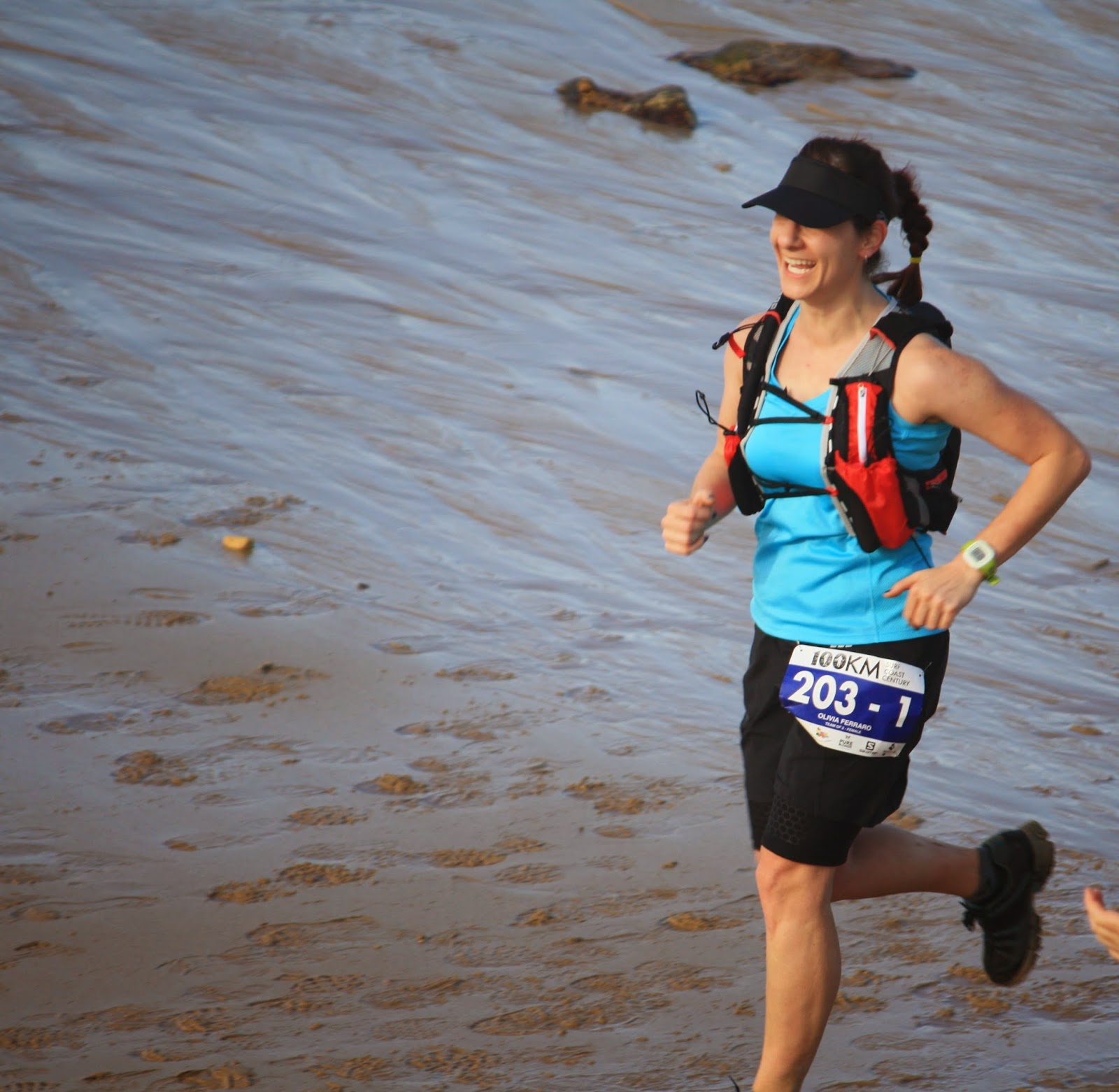 I changed run groups and found the trail scene was alive and well in this new group. There was a strong running culture and this spurred me on to completing my second ultra, 56km Two Bays.

I threw myself into a variety of races to build on my endurance, being a volunteer sweeper at the Cradle Mountain run, the Baw Baw trail festival marathon, Razerback, Wilson's Prom, Trails Plus' You Yangs and Tan Ultra and the Surf Coast marathon.

My training turned serious during July and August, with solid building of 100km weeks in August. I thoroughly enjoyed the eating aspect, which seems to have had some trouble stopping now after the event! hehe.

Waking up Saturday 13 September at 4.30am, nerves are a-plenty, trying to guzzle down food and a coffee, I dress excitingly, wearing the official t-shirt, thinking 'i earned this'. I'm ready.

I see a lot of familiar faces gathering around the car park. I give my friend, Kellie (new women's record holder! 9.29! respect!) a hug and wish her well, pose for photos with our run group and set off for the start line. The hugs and well wishes continue, with sayings of 'hope we get to run together'. 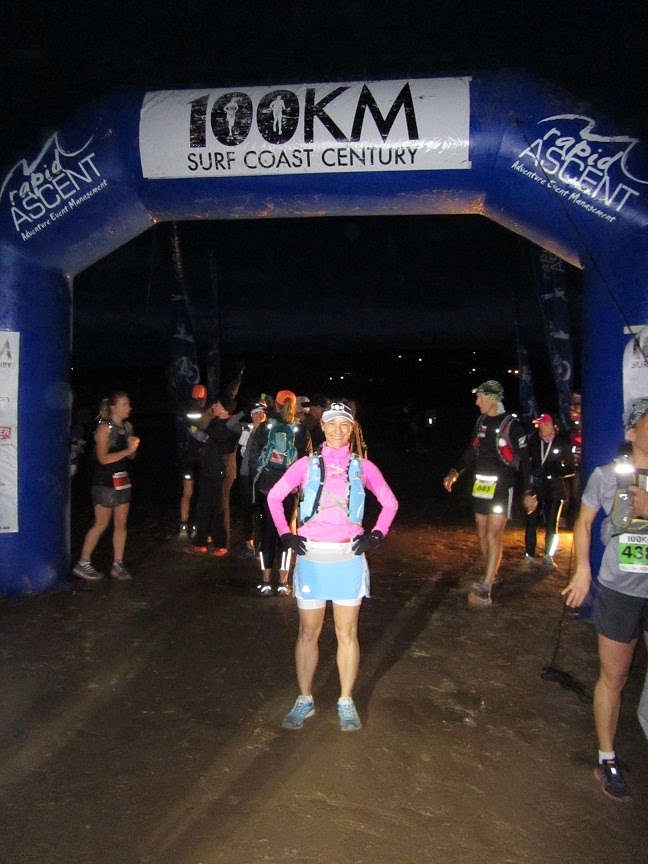 I start with my friend Stella, who's running the first leg of a relay and we dance through the sand, skip and hop over the rocks, talking, laughing and admiring the fantastic views the Surf Coast offers us under the cliff tops at dawn. 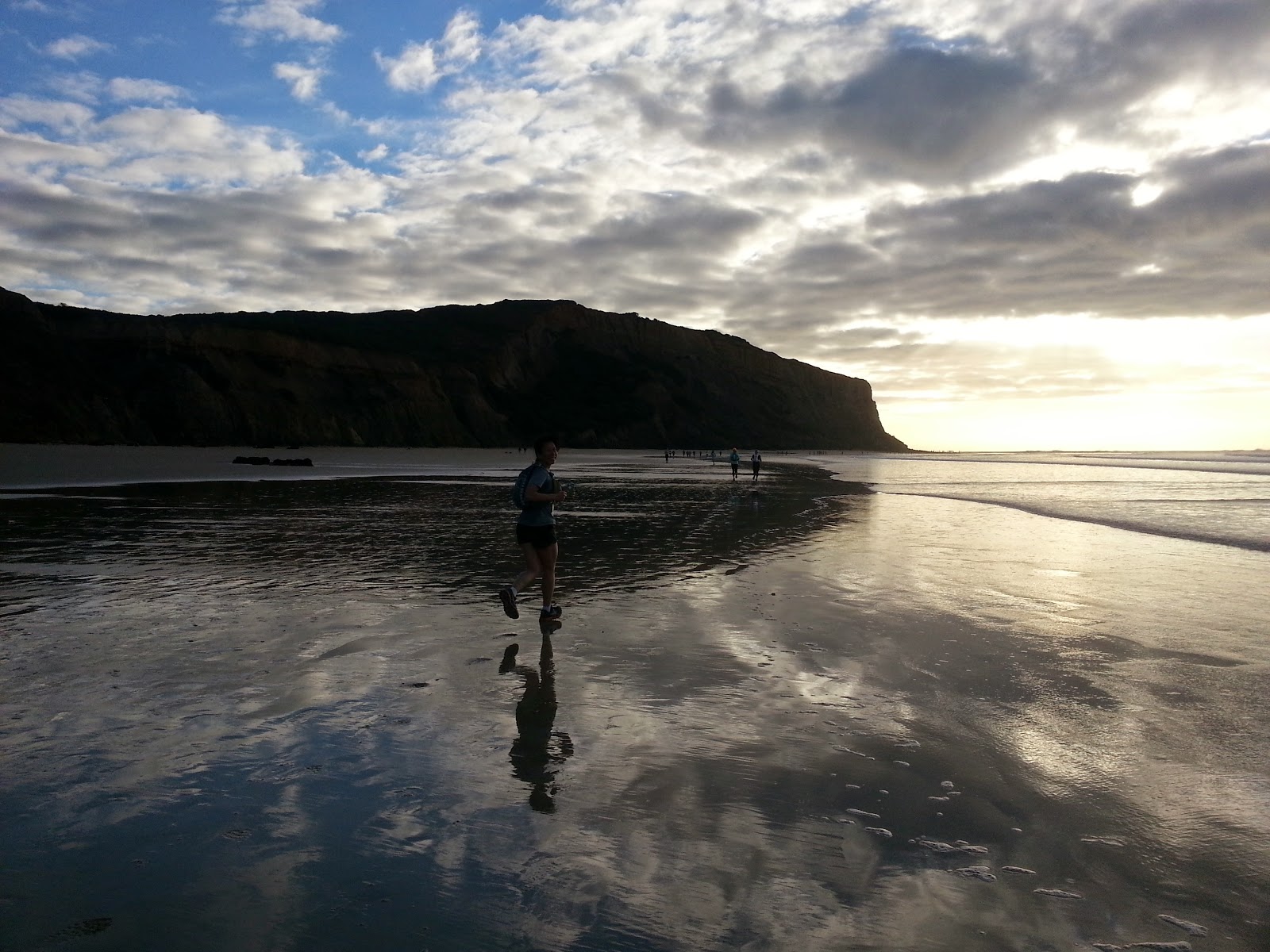 We approach the end of our first leg and I'm feeling great! I can't believe that was 21km! I almost wanted to do it again!
The fan fare we hear from loved ones above us was infectious, we couldn't help but be silly. 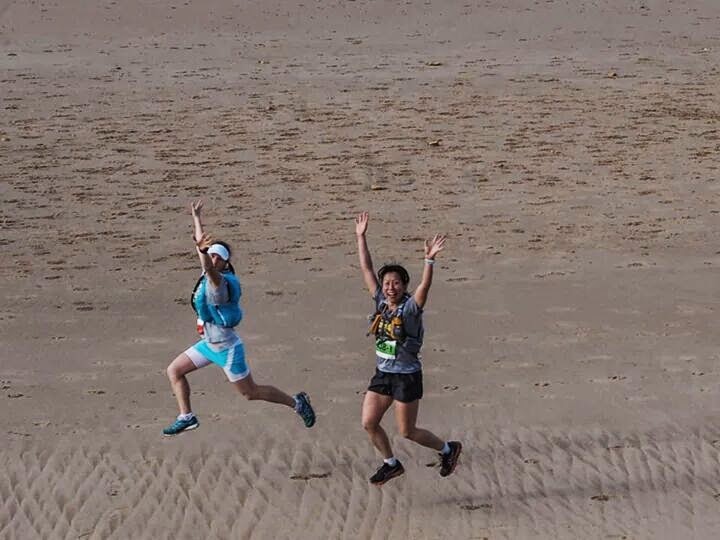 We hug and off I go to start the second leg. Without my buddy, it's a little quiet, I talk to any and all of the runners around me and everyone has a chat back. There is something to be said about trail runners, such a friendly bunch of people, it's what keeps me coming back for more.

I'm coming up to the 39km hill, this was my hill from hell last year. I was in tears then and decided whilst hiking it I would send a selfie to my hubby to show the contrast of when he heard me last time on this hill. 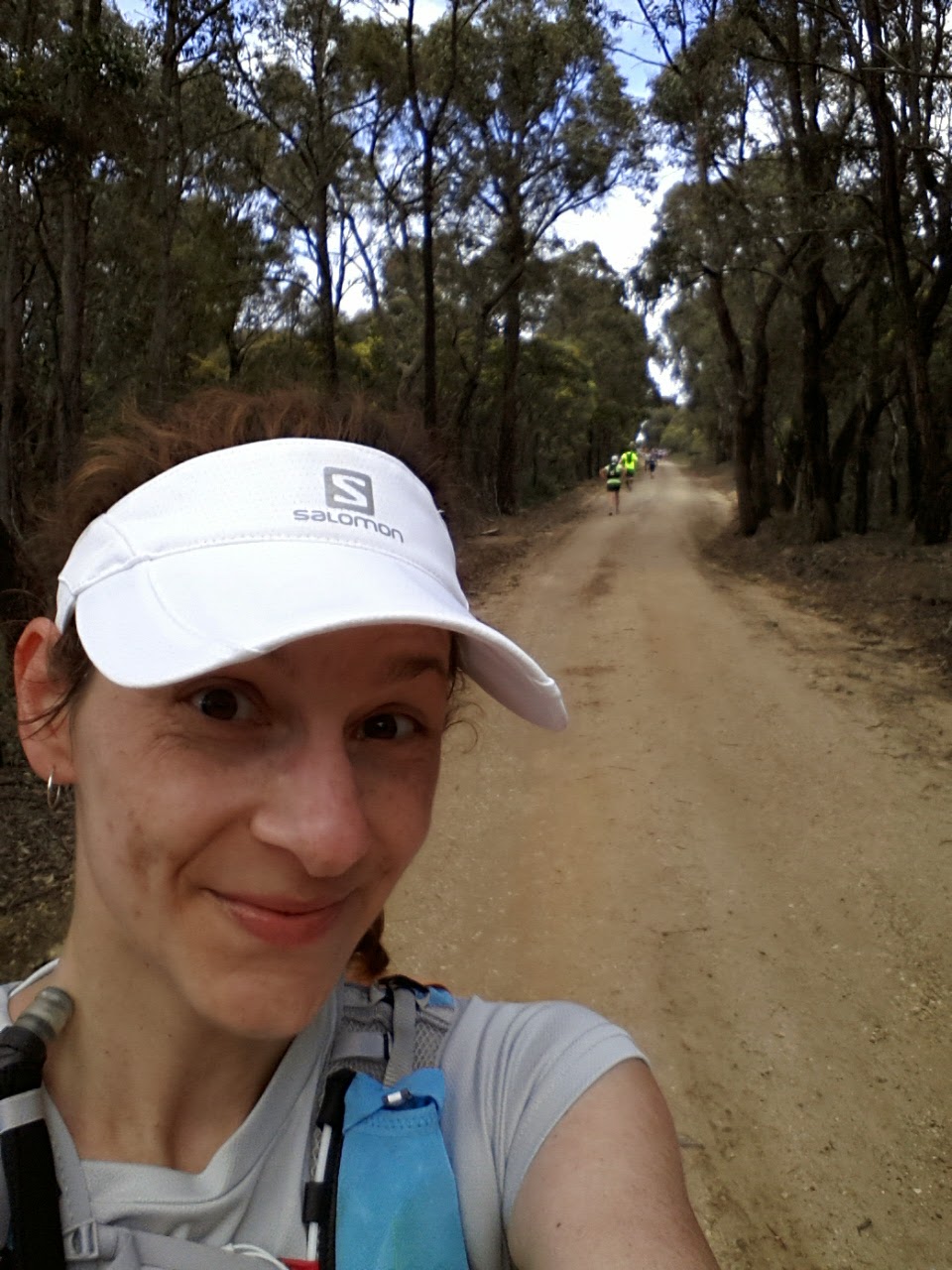 'Greetings from 39km - Wish You Were Here'

It's not long after this that my tummy starts to play funny-buggers. I feel a little nauseous. I start thinking 'am i going to throw up? what is going on?"
Eating was never too much of a concern, I happily sucked on highly concentrated Hammer perpetuem and gels since starting and this was a proven combination that worked for me.
My brain goes into overdrive, i'd never felt this before. I try not to think of the worst, and keep moving forward.
I see Simon and my bestie Rachael pop out from the road, rattling the cowbell and my spirits lift. I wince to Simon about my tummy woes but it's soon forgotten as they both give me a hug and i'm on my way again.
As it turns out, a few rather large 'Barney Gumble' belches later and low-and-behold, i'm right as rain! My brain shifts gear and I feel on top of the world. Bring on the half-way point.

I'm running and chatting with my friend Dion and I start to see some of my fellow run groupers waiting around the half-way point and i'm thrilled to be back in Anglesea, I didn't really think too much of what was ahead but rather the excitement of seeing familiar faces, to stop, have a chat and re-group before the next leg. 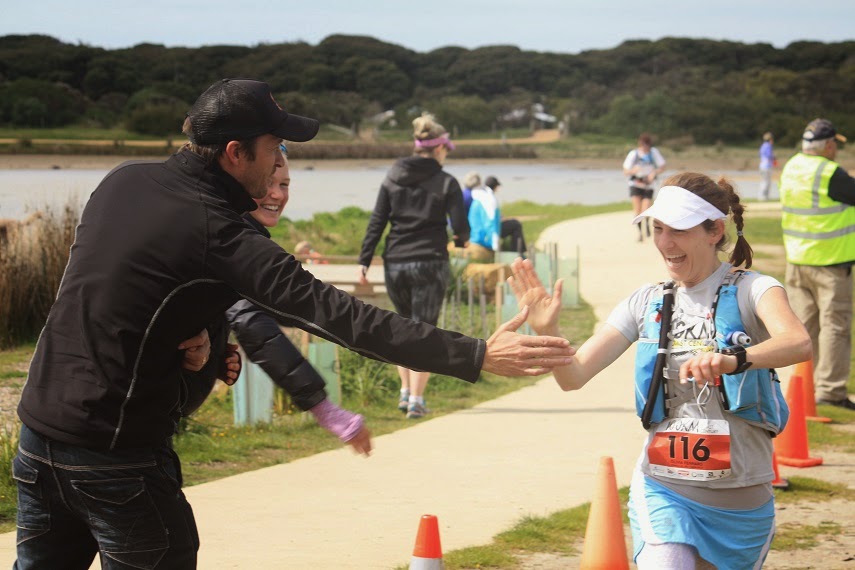 Super excited to give high-fives to familiar faces, Lucy and Chris

I've been told that I would be quicker if I didn't talk so much.
I stayed at the half-way point for 15 minutes, chatting with friends, laughing and re-grouping. Honestly. While I did have a goal time in mind, I wanted to enjoy the experience. For me, I was winning by feeling good and being able.

I set off on the third leg, the one with that crawl-under-bridge moment. I'd jokingly said the night before that I wouldn't do it. A friend in the briefing sternly told me not to by-pass the experience of the whole course and with that in mind, I crawled it under the road. Thank you Tegyn for the advice :)

I found the third leg tough like any other, but damn that was fun! I caught up with Catherine, another friend from a run group relay and Dion, and we all trudged up the first hill.
I found myself running with like-minded strong folk, climbing up the hills with Gavin, Sophie and Sandra in a walk/run strategy. I felt like my race really started around the 60km point and for every climb there was a free spirit feeling of the downhill.

I arrive at the 70km checkpoint, feeling amazingly good and a quick check in with Simon and Rachael and I'm on my way, promising they'll see me in an hour for the 77km checkpoint.

An hour and four minutes later and lots of enjoyably tough undulating tracks, I arrive at 77km and was given an amazing fan entrance by many familiar faces, safe to say, I felt like a rockstar.

The sun is starting to set as I run towards the 86km checkpoint and are amazed to see a party of people, my crew Simon and Rachael, my close friends Alex and AB, Sam and Mat, Francis and a fellow run grouper Kieran, welcoming me to the checkpoint. I am blown away! I almost want to turn around to see if it is actually me they're cheering on. 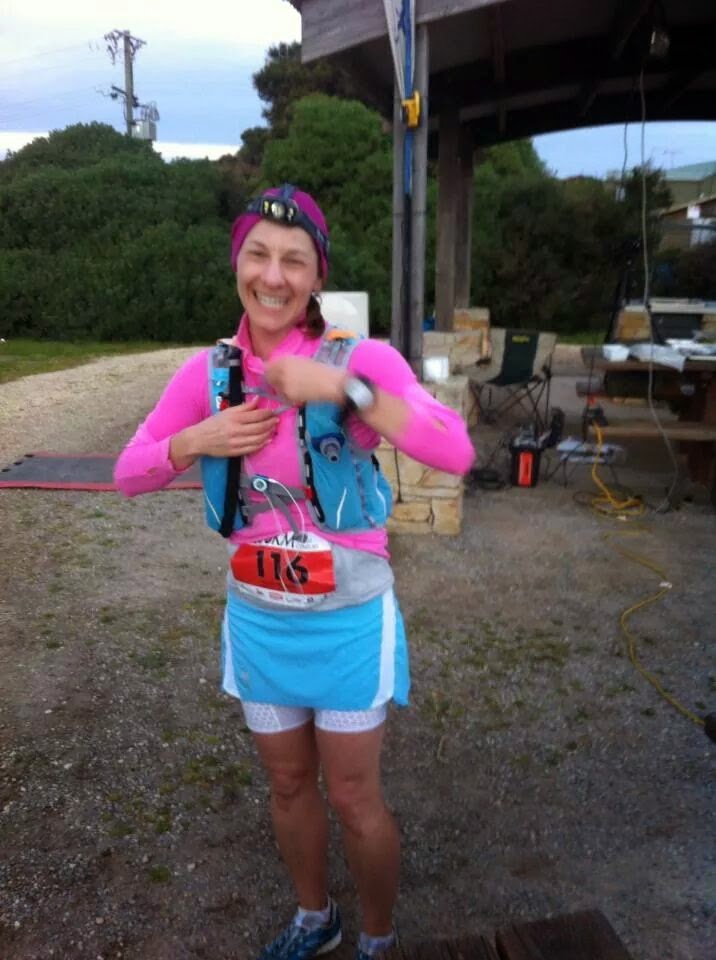 My heart swells and I know there is only 14km left to go, slight undulating trails and a beach stretch, both of which I knew would be tough on tired but happy to finish legs.

The sun goes down, the headlamp goes on and the end is near. I get a zombie shuffle on during the beach stretch, finding it tough to get a groove going, but enjoying the light show other fellow runners offered when I turned around.

I almost tear up when I see the 2.9km sign to Anglesea, I see the lights of the finish line nearing and I start repeating 'oh my god, oh my god' I can't help but feel relief and such pride that my journey to the end is nearing.

I step down onto the beach for the last dash to the finish, goosebumps run along my arms, I almost start to tear up and I say to myself 'you just ran 100km' , with the strobelight guiding me to the finish, I turn the corner. I see the welcoming fairylights of the finish line and I hear the cheer of what felt like a stadium of supporters! 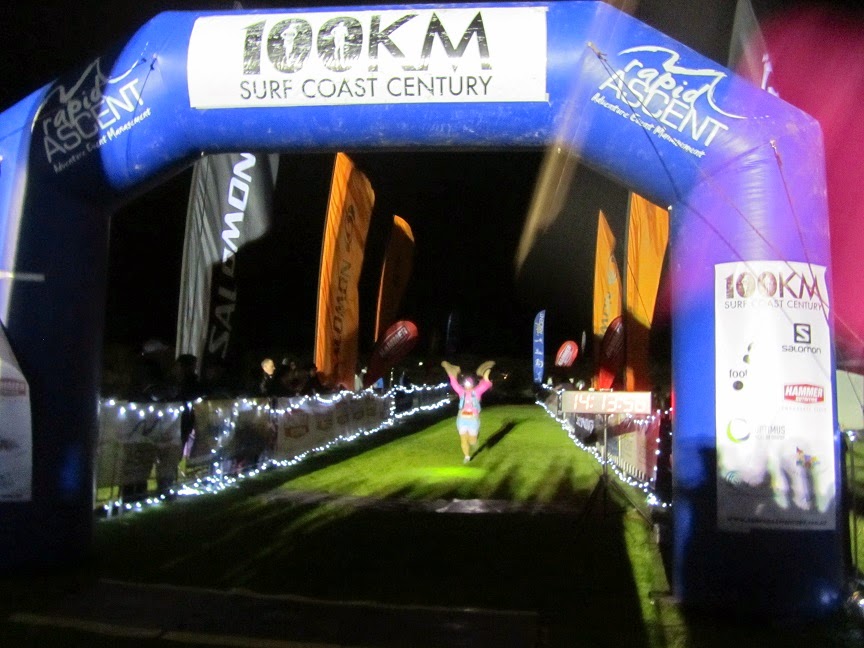 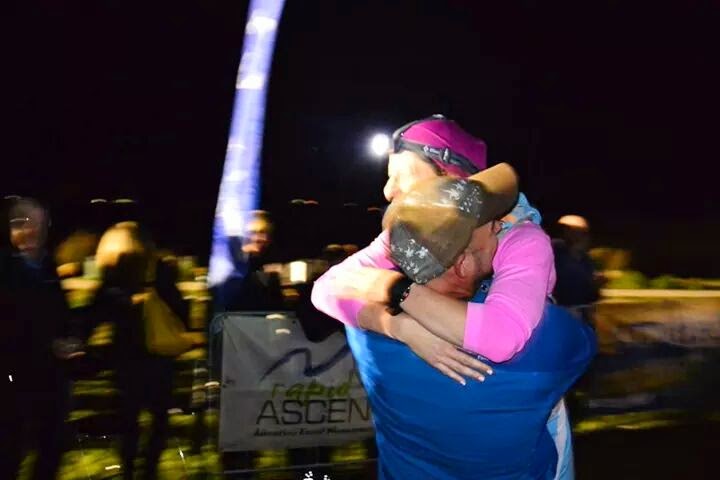 I'm picked up and swung around with such joy by Simon. The most rewarding moment of my whole running life. 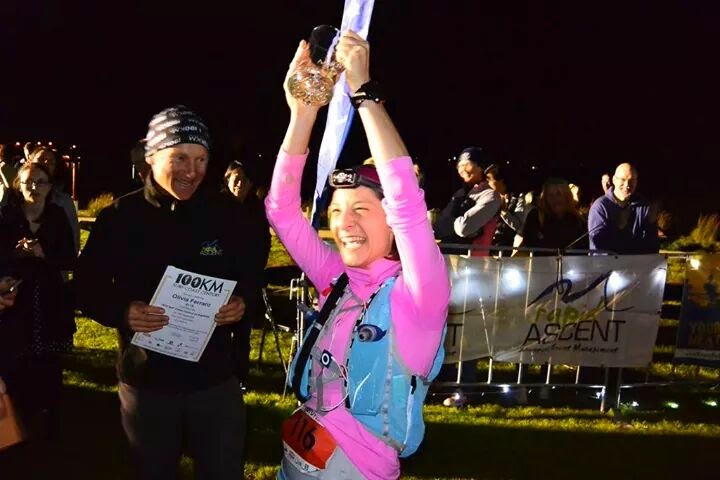 It wasn't easy. It took hard work and determination. But I am proof that anything is possible and achievable.

I am now 37 years old. An ex-smoker clean for almost two years. Clean eater. And the happiest I've been in my life.

Weight loss was never my intention with running, a happy side-effect that occurred, and yes, it may be the addiction I replaced from cigarettes, but it has taught me a lot about myself.
I don't sweat the small issues anymore. I don't seem to over-analyse like I used to, and I'm genuinely happy.

Running, in particular trail running and the trail scene has some of the best people within it's community, from the runners, runners families. volunteers and race directors.

I am fortunate to have some of the closest friends from these communities and whether they run, support or cheer, the bonds formed from the basis of running are the people in my life that make me laugh louder, smile brighter and live better. 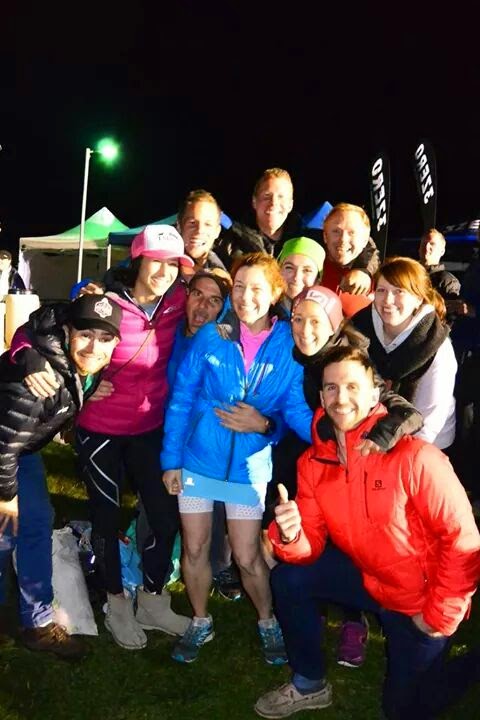 Thank you to all my friends in above said picture - love you all.

Congratulations to the fellow runners of the fantastic Surf Coast Century, solo, pairs and relays.

Thank you Rapid Ascent for another quality event.

Thank you for taking the time to read my waffle :)

Livvy
My name is Olivia, but you can call me Livvy. I love life, my husband, my dogs, running, mint patties, nail polish and being happy! This is my adventures in what makes me happy!